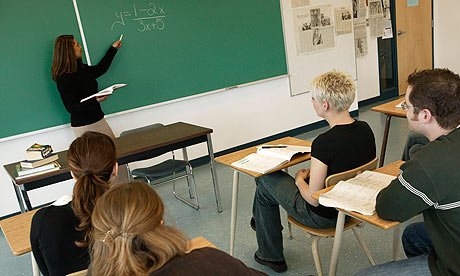 Teachers have called for the time they spend teaching pupils to be capped at 20 hours a week – four hours a day.

The National Union of Teachers (NUT) passed a motion on Tuesday demanding a new working week of 20 hours’ teaching time, up to 10 hours of lesson preparation and marking, and five hours of other duties, including time spent inputting data and at parents’ evenings.

This would mark a drastic reduction in teachers’ hours. In the past year, the number of hours teachers work has dramatically risen as a result of pressure from the government and the school inspectorate, teachers claimed at the NUT’s annual conference in Liverpool.

They said they had no time to spend with their children or to eat lunch and complained that they often worked past midnight.

A current agreement between schools and unions states that teachers should spend time on “any reasonable activity” their headteacher instructs. There is no fixed limit on the number of hours teachers work a week, although full-time staff must be available for just over 32 hours. The contract between unions and schools states that teachers must be available to work “such reasonable additional hours as may be necessary to enable the effective discharge of their professional duties”.

Richard Rose, a teacher from Cambridgeshire, told the conference there was “no time to eat, think or go to the toilet” in the working day. He said many teachers sent emails after midnight because there was no other time to do this. His colleagues had little time to spend with their children. “It’s come to something that teachers don’t have time to look after their own children,” he said.

Christopher Denson, a teacher from Coventry, said teachers’ workload levels were totally unsustainable. “It’s essential that we act to ensure that what’s already NUT policy – a maximum working week of 35 hours – becomes a reality for teachers,” he said.

But Professor Alan Smithers, from the Centre for Education and Employment Research at the University of Buckingham, said the demand was ridiculous and detrimental to the profession’s public image.

“Teachers undermine the respect of the general public by behaving as an old-fashioned trade union and making unrealistic demands,” he said. “Clearly teaching depends on good preparation and rigorous marking of pupils’ work and there needs to be an allowance of time for that, but to attempt to limit the number of teaching hours when there is a great strain on finances is a ridiculous request. Teachers do themselves no favours by acting in this way.”

A spokeswoman from the Department for Education said: “By scrapping unnecessary paperwork and bureaucracy, we are making it easier than ever before for teachers to focus their efforts on teaching and learning and getting the very best from their pupils.”

For the past six months, the NUT has been engaged in action short of striking in conjunction with fellow teaching union the NASUWT in protest over workloads, working hours, pay and pensions. They have refused to supervise children in the playground or attend some meetings after school.

The motion also called for a maximum class size of 23 in infant schools and 26 for other age groups. Teachers said there was a stark comparison between class sizes in fee-paying schools, such as Eton where there are eight pupils to each teacher, and schools in the state sector where there are as many as 31 pupils.

The NUT unanimously passed a vote of no confidence in the education secretary, Michael Gove, and called for his resignation. The 1,000-strong audience heard that Gove had “lost the confidence of the teaching profession … [and] failed to conduct his duties in a manner befitting the head of a national education system”.

Teachers shouted “Gove must go” after the no-confidence motion was carried.

Gove had “chosen to base policy on dogma, political rhetoric and his own limited experience of education” and made drastic changes to schools without consulting parents, teachers, children, governors or councils, the motion said. It said Gove had demoralised the profession with a “discourse of failure” and carried out government business through private emails.

The education secretary was “destroying the education of all our children and must go”, Jane Walton, a teacher from Wakefield, told the conference.

Oliver Fayers, a teacher from Camden, north London, said teachers had a duty to hold a “failing secretary of state to account”. Nick O’Brien, a teacher from Norwich, said Gove was making teaching a profession that “no one in their right mind would consider joining”.

Christine Blower, general secretary of the NUT, said that if the secretary of state chose to “plough on regardless”, his “poll tax moment” could be around the corner.

via Limit teaching to four hours a day, says union | Education | The Guardian.